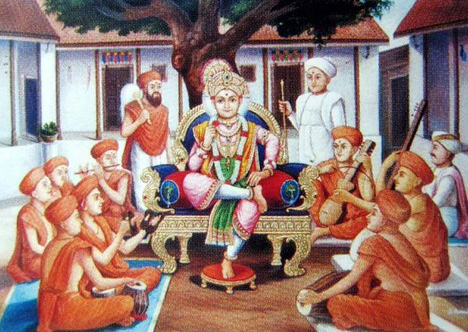 Here’s a bit of the history of the Swaminarayan Sampradaya:

A boy born in a brahmana family in the sub-caste of “saaryupari” brahmins, was named “Ghanashyam Pande”.  He left home at an early age and wandered about India seeking spiritual truth.  He met his guru at at place in Saurashtra (now a part of present day Gujarat State), who’s name was “Ramanand Swami”.

He was initiated into Vaishnavism by his guru and given the brahmachari name “Sahajananda” (or “Sahajanand”).

He built six large temples during his lifetime.  He was born approximately two hundred twenty two years ago… and lived for forty nine years.  He wrote down his basic tenets in a book of two hundred two samskrita verses entitled, “Shikshapatri”.

Also, he appointed his nephews as “diksha gurus”.  One was the “head” of the “North”, and he was headquartered at Ahmedabad – in the Swaminarayan temple at “Kalupur”, where he personally installed Deities of “Nara Narayana”, and another for the “South”, at Vadtal, near Anand (40 kilometers North of Baroda), where he installed Deities of “Lakshmi Narayana”.

Apparently, his successors, the descendents of the nephews he appointed (or those very nephews themselves – it’s unclear when this began) declared him as “Bhagavan” – an incarnation of God.  This is clear from the websites of the “original” “Swaminarayan Sampradaya”, still intact and headed by his nephews descendents – who are much like the “caste Goswamis” of Bengal, or the “Goswamis” of the “Vallabh Sampradaya”, etc.

Their Sampradaya spread quite a bit throughout the three regions of Gujarat, (Gujarat, which stretches from the Maharastra border to the Rajasthan border [there is a “natural border” on both ends in as much as both areas on the borders are “hill areas”], the Saurashtra peninsula, and Kutch) and especially amongst the “landed farmer” community, the “Patels”.  However, certainly not nearly all Patels became their followers.  Persons from other castes, such as brahmanas, vaishyas (“vania” in Gujarati), and various shudra castes also follow the Sampradaya.

In the interim time between the passing of Sahajanand himself until the present (some one hundrend seventy three years ago), the Sampradaya constructed numerous temples of Lakshmi Narayan and Nara Narayan (depending on which side of the “North/South” divide those temples came up on) throughout Gujarat State and also in the “Khandesh” region of Maharastra.  They also constructed a few temples in Western Madhya Pradesh.

Now, within the past twenty five years, they have spread outside of Gujarat, but their followers are mostly Gujarati speakers.

And, it’s been during these past twenty five years or so, both in Gujarat and in places where there are sizeable populations of expatriate Gujaratis, they have been eclipsed by the “BAPS” (Bochasanvasi [“Bochasan” is a village, about 35 miles from Baroda, “vasi” = “resident” {“Vrajavasi” = resident of Vraja}], Akshar Purushottam Sanstha, of Pramukh Swami.

The “BAPS” institution/splinter group/subsect, is just one of several such “splinters”.

The other prominent ones are:

And numerous other smaller breakoffs, who are independent, like the present “Gaudiya Math diaspora” situation.

However, the “BAPS” institution, mentioned above, has expanded rapidly.

This is due to the personal charisma of the present “head” of the sect, Pramukh Swami, and his immediate predecessor, “Yogiji Maharaj”.

Throughout Gujarat they have constructed, mostly in the past fifteen years, large solid stone – and quite costly – temples.  The “Akshar Dham” temple, which saw a terrorist attack that killed 30+ persons during September of 2003 (http://www.rediff.com/news/akssep02.htm), and since become a kind of “fortress”, is now famous throughout India.

[Addenda note: now there is an even larger Akshardham at New Delhi, built on 100  acres of land from the bed of the Yamuna river].

Located on twenty three acres of land in the capitol of Gujarat, it attracts thousands of visitors everyday.  It’s a kind of “spiritual” Disneyland.

The guru of Pramukh Swami and his predecessor “Yogiji Maharaj”, “Shastriji Maharaj”, was the one who split away from the “Southern” headquarters of the old Sampradaya in the middle 1920’s.  His complaint, as far as I understand since I’ve yet to see any documents in that connection, is that the “grihasta guru” of the South was corrupt.

One of the major “claims to fame” for the BAPS sect is that their saffron clothed sadhus – all of whom, by the way are brahmacharis, including Pramukh Swami and his predecessors mentioned above – don’t “touch” or keep money.

They are “not allowed to” according to the principles of their sect.  So their expenses are borne by the BAPS institution, which is managed by grihastas.  Due to this, you will see their sadhus always accompanied by grihasta “devotees”, who take care of their transportation and general expenses.

Believe me, they live “comfortably”, and eat well too!  Presently Pramukh Swami is 84 years old, and continuing an active life.  He’s had 2 “coronary bypass” surgeries, but otherwise maintains “robust” health.  He has any number (inestimable) fanatic followers, and their sect appeals to the Gujarati diaspora in many places as mainly a “social gathering place”, for more religious minded Gujaratis.  Many people who visit their sect don’t consider their “deviant” philosophy.

And, that philosophy, based on a new concept that was propagated by “Shastriji Maharaj” (who’s initiated brahmachari name was “Yagna Purush Das”) was called by him “Akshar Purushottam” “Upasana”.  “Akshar” = “indestructible brahman”, “Purushottam” = “Supreme being” (in their concept… a more literal translation would be “topmost man”) and “upasana” = “worship”.

In “Shastriji Maharaj’s concept”, Sahajanand “Swami” (Ghanashyam Pande), the founder of the sect is the original form of the “Supreme Personality of Godhead”.  “Krishna in Goloka is meditating on “Shriji Maharaj” (“Lord Swaminarayan/Sahajanand Swami/Ghanashyam Pande”) in “Akshar Dham” = the indestructible spiritual world!

Quite different from the 1st verse of “Shikshapatri”, where Sahajanand writes that he’s meditating on Krishna in Vrindavan!

But this concept has been made popular by this sect, where the Deities of Nara Narayan and Lakshmi Narayan have been replaced, or moved to the side (in BAPS temples, they have Radha Krishna Deities on the side) and “Akshar Purushottam” Deities, are in the middle.

Also, in this concept, besides “Sahajanand Swami” being considered “Purushottam”, Gunatitanand “Swami” (again, a brahmachari, not a sannyasi), a contemporary and disciple of Sahajanand Swami, who was incharge of one of the original six temples (the one at Junagadh, in Saurashtra) is considered the incarnation of the impersonal, indestructible “brahman”, and his figure is the one, now deified as “Akshar” in “Akshar Purushottam upaasana”.

So you have these two Deities seen in their temples, right in the middle – and you can have a look at the BAPS website: http://www.swaminarayan.org/.

If you need any further information, please feel free to let me know.

Hope this meets you well.

The “original” or “old” Swaminarayan Sampradaya, represented by the “guru of the North”, and based at the old Kalupur Swaminarayan temple at Ahmedabad, has it’s websites:

For an overview on their “shastras”, see:

For the entire English text of “Shikshapati”:

To read some histories of the “grihasta gurus” of the original sampradaya:

Here are a few excerpts from “Shikshapati” that show the Vaishnava nature of Sahajanand’s teachings:

“I meditate, in my heart, upon Lord Shree Krishna, on whose left stands Radhikaji, on whose bosom resides Laxmiji and who sports in Vrindavan.”

Those of my Brahmin, Kshatriya and Vaishya disciples who have been initiated into the devotion of Shree Krishna by their Guru shall always wear around their neck a double Kanthi prepared from Tulsi wood and shall mark their forehead, chest and both arms with a Tilak.

The Tilak shall be made with Gopichandan stick or with consecrated sandal paste mixed with Kum-Kum (saffron or red powder) duly offered to Lord Krishna.

Then they shall, with due respect, bow down before the images of Shree Radha Krishna and recite the eight syllabled holy Mantra of Shree Krishna according to their capacity and then attend to their daily routines.

And of the Dharmashastras, the Smruti by Yagnavalkya Rishi. These eight Shastras are dear to me.

They shall acknowledge the Bhashya (commentaries) on Vyaas-Sutra and Shree Bhagwat Geeta by Shree Ramanujacharya, as My Vedantic Philosophy.

Those text in these scriptures which speak the greatness of divinity of Shree Krishna, Dharma, Bhakti and Vairagya shall be considered to be of greater value.

The message of these scriptures is that the devotion of Lord Shree Krishna is inseparable from Dharma.

And that Ishwara is Lord Shree Krishna, who is Parabrahman Purushottam and our most cherished deity.  He is worthy of worship by us all.  He is the source of all incarnations.

Some of the “splinters” have websites: