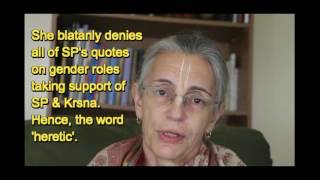 Mohan S 6 days ago
This zionist infiltration conspiracy is simply nonsense. It is just a difference between strong links in the parampara and weak or broken links in the parampara
as explained by Krsna in Bg 4.1-2 https://www.vedabase.com/en/bg/4/1Some of the most strong and outspoken defenders of Srila Prabhupada and
Krsna’s Vedic civilization are of Jewish background for example Basu
Ghosh Prabhu, Danavir Swami, Niranjana Swami, Nrsimhananda Prabhu and
BVPS. There is also Jayadvaita Swami who some consider quite
conservative, what to speak of the late Brahmananda Prabhu.

It is a fact that while in the USA 2% of the population is Jewish in
ISKCON USA 12% is of Jewish background – many reasons for that and won’t
get into it now. So because there is high representation there will a
number who are weak or broken links like Hrdayananda, Bir Krsna, and
Urmila dd, but also quite a few as already mentioned who are very strong
links.

And what about those who came from Christian background who are broken
links? People like Sacinanda Swami (whose ancestors literally were
anti-Semite Nazis) same with Dinasarana dd (GBC of Germany), and
Praghosh and SaunakaRishi who are both of Irish Catholic background. And
also people like Bhakti Marga Swami and Ramai Swami. And Sahjiyas
like Madhavananda and Bhakta Rupa neither of whom are Jewish. You even
have Indians like Caitanya Caran, who is all over Dandavatas, and who is
a total feminist as well as Drutakarma Prabhu both of whom are on the
SAC. In fact, there is only one Jewish person on SAC all the rest are
non-Jewish deviants. If you go though those who are deviant you will
find plenty who are not of Jewish background, in fact, most are not
Jewish

So, in conclusion, to use terms like “zionist infiltration” is simply
over simplistic, offensive and indicative of a non-critical thinker
given to conspiracy theories.