Lokanath Swami blessed me by giving this blissful service of being his secretary during padayatra and sometime before while he was staying in California.
-Vrindavan Lila Dasi

She has deleted these two posts from FB so only these screenshots are available.

Here she confesses it her self:
Lokanath Swami blessed me by giving this blissful service of being his secretary during padayatra and sometime before while he was staying in California. 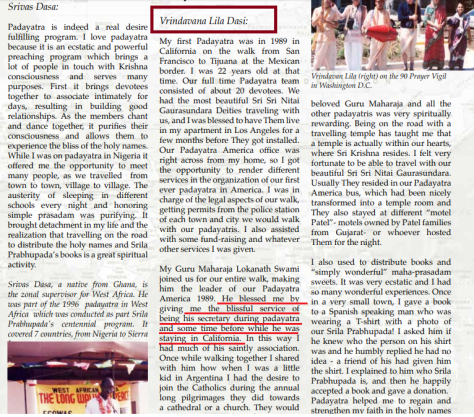 Prabhupada: All the sannyasis of Ramakrishna Mission, they eat meat, they drink, they have woman secretary, and everything. Unless one is purely Krsna conscious, one cannot give up all these bad habits.

Unless one is substantially advanced in krsna-bhakti, they cannot give up this material attachment — illicit sex, meat-eating. They cannot. It is impossible.

Prabhupada: So even in the name of svami and big, big yogis… They are doing all these things. Especially those who go in foreign countries. And in USA illicit sex is very cheap. Everything is very cheap. Yes. Intoxication very cheap, meat-eating very cheap, gambling very cheap. So when they get this cheap amenities, they forget their so-called spiritual life.
April 24, 1974, Hyderabad

Prabhupada: Some of our students went to see one big svami in New York — I do not wish to name — he was smoking. The svami was smoking, and the student, my student, said that “We do not smoke.” So he was a little ashamed. Svami is smoking, svami is drinking, svami is keeping private secretary, women — and still going on svami.
(unknown date, India)